What's the Latest with the Commercial Real Estate Market

Here's the newest edition of our continuing series on What's the Latest with the Commercial Real Estate Market.

To dive deeper into the state of the commercial real estate market and the economy here and abroad, keep on reading. (We have graphs!) Interested in watching a video on these market updates? Click here for our YouTube Channel.

TL;DR - While it's getting easier to close deals in the covid era, there are other warning signs for the future health of the commercial real estate market.

Part I: Shift in Commercial Real Estate Prices
As more businesses close down, go into bankruptcy, or generally consolidate, that leaves more space on the market for sale and for lease. As the number of places on the market increases, this drives down actual prices. 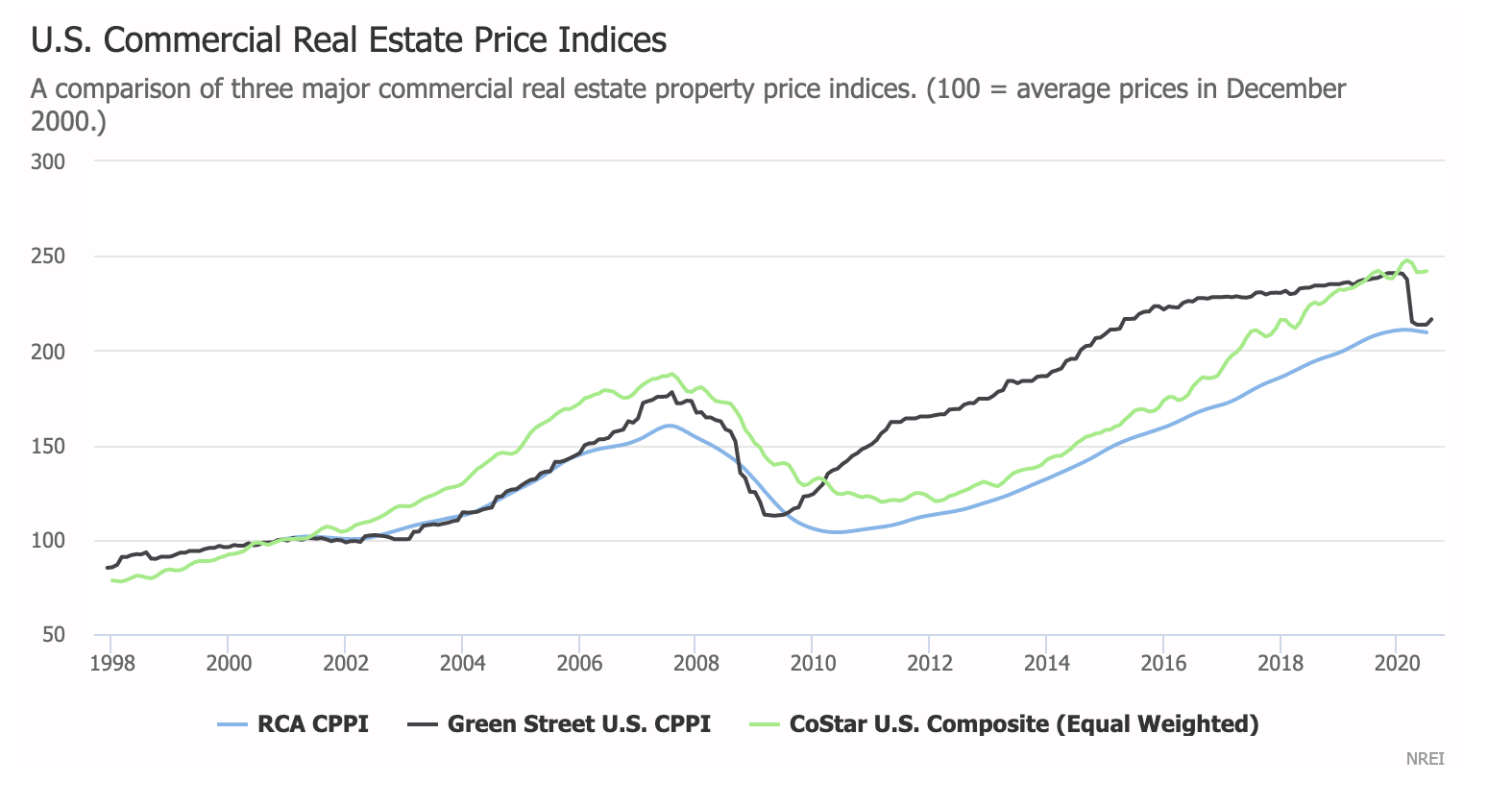 From the chart above, we see three different pricing benchmarks for commercial real estate prices across the U.S. across all property sectors. All three indices have seen a leveling off in pricing since March, but after that the models diverge. Green Street's pricing model shows a significant dip in prices while CoStar's model shows almost no dip at all. Real Capital Analytics's model shows pricing dropping with a slight uptick in recent months.


Part II: Job Creation Under Recent U.S. Presidents
There's an addige in the world of political science that the President of the United States has little control over the outcome of the economy, but that they often receiving all of the credit - or all of the blame - for the results of the country's economic output. 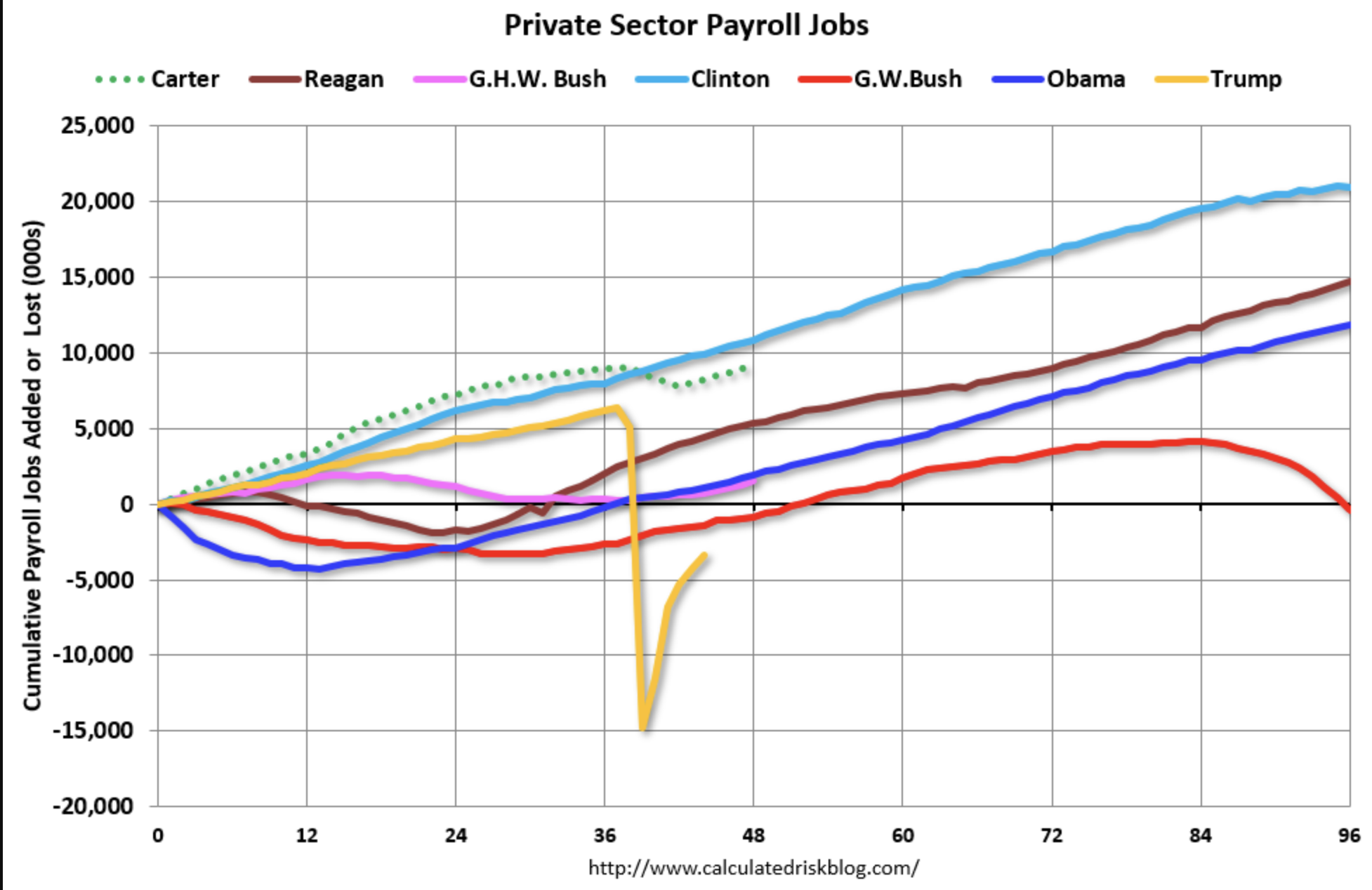 From the chart above from Calculated Risk, we see the number of jobs created (or lost) in each month of the presidency for the seven most recent U.S. Executives in Chief. Every president from Carter through Obama has ended their administration with an overall net positive job creation number. Trump may be the first president in over four decades, assuming he does not win re-election not to end his term as president with a positive job growth record.


Part III: The Ability to Close Deals
The coronavirus pandemic put a serious pause on normal business operations. In some cases, business that was once planned was never completed. The same holds true for commercial real estate transactions that had been previously scheduled to close in the months following the pandemic shut down in the U.S. 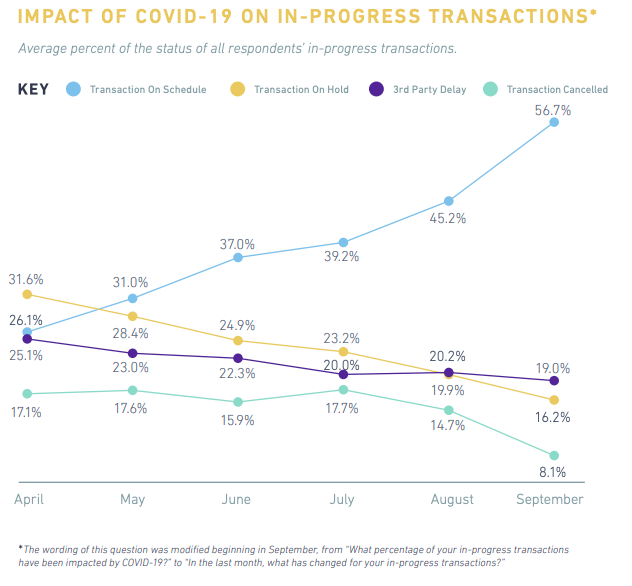 From the chart above from SIOR, we see that since the beginning of April the ability to close transactions has increased. From April through August, nearly 20% of transactions were canceled, specifically because of covid-related reasons. During that same period, an additional 40% - 50% of deals were delayed because of covid. In more recent months, the effects of covid on deal completion have been less severe.


Here's to the Fundamentals.
-Nico